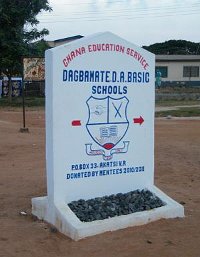 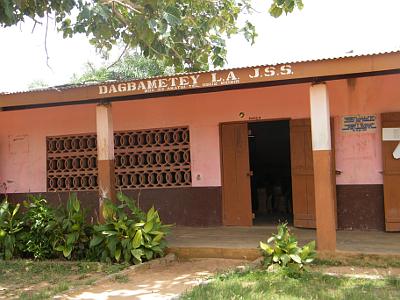 Education at the primary level is free in Ghana but students pay school fees at the secondary level and higher. Parents put whatever little money they have toward their children's higher level schooling. In some cases parents who otherwise could not afford to send their children to secondary or post-secondary schools are getting financial help from sponsors from abroad through the Adzena Foundation. More sponsors are always needed.

Like much of Africa, Ghana's schools face challenges. Lack of funding, inadequate teacher training, lack of role models and poor learning habits plague the educational system. But in just a few decades Dagbamete's schools have made enormous strides. 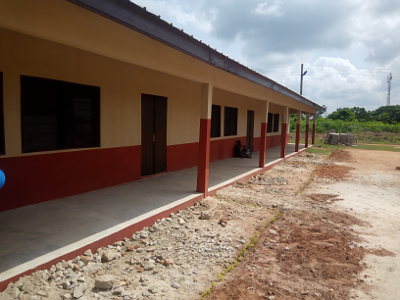 In May 2017 a violent windstorm tore off the roof of the east block of the Dagbamete Basic School, causing extensive structural damage to the building. Students had to finish their school year in makeshift classrooms set up outdoors or in an unfinished building. Following a concerted lobbying effort by the chief and the elders of the village, the government rebuilt the school in time for the start of the school year in September 2018. The building is now stronger, safer, and better able to withstand severe weather. 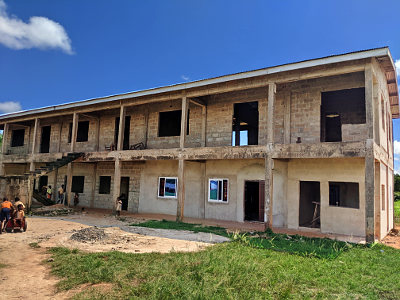 Work on a new school block for Dagbamete's junior secondary school (JSS) classes resumed in 2019 after a long construction hiatus. Due to a lapse in funding from overseas donors, construction was halted for more than a decade. Recently the village managed to raise enough money to add a roof and some walls, and to partially finish one of the three ground floor classrooms with windows. The other two ground floor classrooms remain largely unfinished but they have been brought to a state where classes can be held in them. As more classroom space is needed, and more funding becomes available, the remaining unfinished classrooms will be completed eventually. The original one story school block used for JSS classes is now the kindergarten (KG) block, thus providing much needed additional space for the growing kindergarten population. 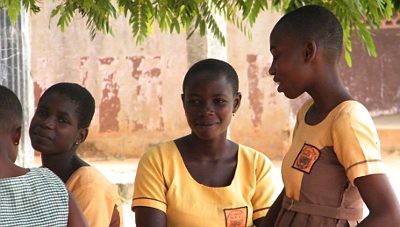 The school library was destroyed by the May 2017 windstorm that ripped the roof off Dagbamete Basic School where the library was housed. Many of the books generously donated by overseas donors were destroyed. Those that were saved are currently housed in the ICT computer centre.

The school welcomes volunteers to organize donations of books for a new library to be established when repairs to the school building are complete. Books in English suitable for primary and junior level school children are welcome. Books written in the Ewe language are needed also. Teachers complain that the lack of books in Ewe is contributing to illiteracy in reading and writing. 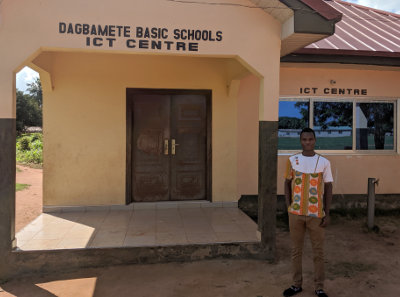 The kids of Dagbamete are keenly interested in computers. When they get a chance to be on a computer they exhibit a natural technological ability that older generations do not have. Fortunately the government recently built a computer lab at the school, and under the direction of ICT Teacher Godwin Gakor, the children have access to laptops. However the school is not provided access to the Internet; so the ICT Teacher and the students themselves pay for a connection on an occasional basis when they can afford it. A project called DagbameteNet, funded by the Adzena Foundation, is underway to help provide computer and Internet access to the children. The goal is to provide highspeed access to every child in the school as soon as practicable. DagbameteNet is seeking sponsors to help fund the expansion of the network and to improve Internet connectivity to the village.

Dagbamete's Chief, Torgbui Klu Agudzeamegah II, gives advice on education and career choices to the youth of the village. Like many young people in rural villages throughout Ghana, Dagbamete's youth is moving to the cities and abroad in search of education and work. But as the Chief says, young people should think about returning to help the village develop and grow. 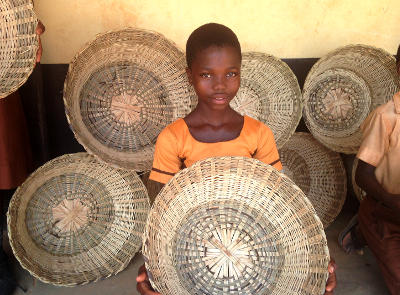 Under the tutelage of teachers with a knowledge of crafts the students of Dagbamete are taught extracurricular skills such as basketweaving. In the past students have woven baskets used to store the whisk brooms used to sweep the classrooms and baskets used as dustbins. Sometimes they even sold baskets to earn money for school or for other purposes.